A ticket for attending a performance is required.
You can book a ticket here: tlonprojects.stager.nl/web/tickets 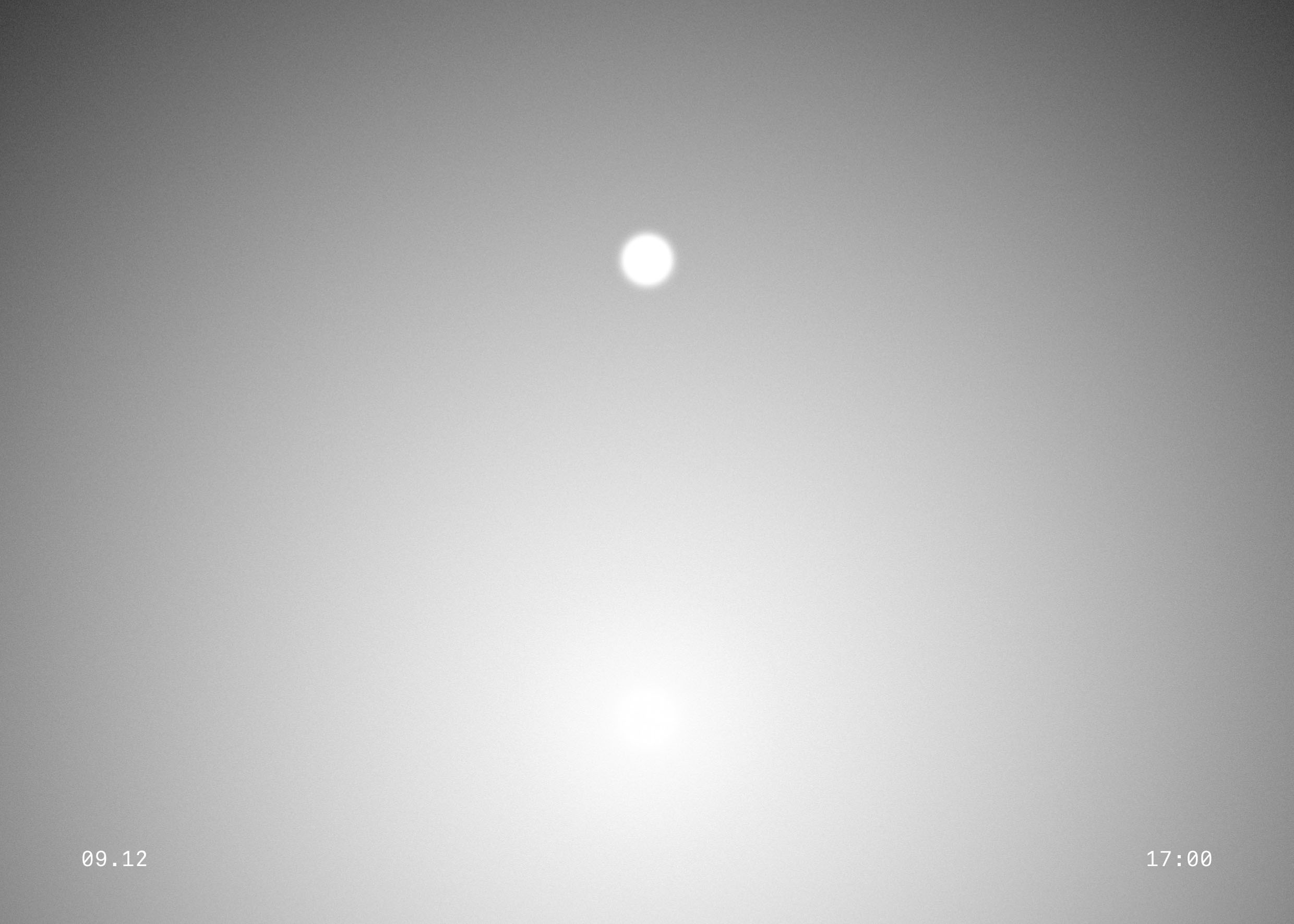 For the past two decades, the Brazilian artistic duo Angela Detanico & Rafael Lain have been working on a coherent oeuvre which poetically translates various linguistic, scientific and meteorological findings. At Tlön Projects’ behest, they will now, for the first time, present a performance with a comprehensive staging environment which brings together various connected works. The presentation will constitute a framework within Tlön Projects’ Satellite Programme and its annual cooperation with ROZENSTRAAT - a rose is a rose is a rose in Amsterdam.

Two Voices (2012) expresses the cyclical relationship of the sun and moon. The presentation’s titular piece is a black & white animation projected onto the opposing eastern and western walls. Sunrise and sunset, moonrise and moonset. One day per minute. 365 minutes equal a year. At the bottom of each projection days, hours and minutes indicate the passing of time at the artwork’s accelerated rate.

From 365 days to 365 minutes, the quotidian variations, evolutions and interactions of the rhythms of sun and moon, day and night are accelerated so as to reveal to audiences the fragments of a pas de deux that usually escapes our inattentive eyes.

30 minutes of this work — the lunar month of December — constitute the score for two actors who will put the solar-lunar dialogue into words by reading excerpts discussing one or the other. The lecture’s duration is determined by the heavenly bodies’ cycles. As these are asynchronous, there are moments at which the actors read aloud alone, moments of vocal overlay and moments of silence.

Both preceding and after the performance, the animation Two Voices will alternate with two black & white animations: 28 Lunes (2014) and 365 Soles (2016). The first shows 28 excerpts from the astronomical tract Sidereus Nuncius by Galileo Galilei from 1610 which reveals the moon’s various phases. 365 Soles is 28 Lunes’ counterpart. ‘Sol’ — Latin for sun — is situated in the centre of a disc constituted by 365 pages from the book De Revolutionibus Orbium Coelestium by Nicolaus Copernicus that was first published in 1543. The words on the pages meld and change 365 times while the word ‘sol’ remains visible at all times.

A new series of textual pieces from the ongoing project Palavras Compostas which started in 2012 will be spread out across the space. The artistic duo will also exhibit three large prints: textual excerpts from the performance with the duration of one day transferred to a sheet of Kozo Awagani paper. Featuring characters instead of minutes, as in the animation Two Voices.

Finally, another of the works on show is a new piece from the series Vanitas (2017 – present day) which features words that reference the passing of time written using a notational system in which every letter of the alphabet is indicated by a particular number of flowers in a vase. Angela Detanico & Rafael Lain used the word ‘cycle’ that is spelled the same way in both English and French as their point of departure and as a meta commentary on the entirety of their works.

Angela Detanico & Rafael Lain adopt language as the subject and object of their work. A poetics that presents the world seen from its own codes of perception and understanding. Their largely conceptual works employ the use of sound, graphics, text, video, and other traditional art mediums within their installations. They represent a rigorous use of formalism and a refined use of visual and written poetry.

Their work reflects their joint fascination with the human ability to contemplate the world around them and beyond. Imbued with scientific, mathematical and literary references, their work applies themes of time, space, memory and the infinite beyond.

Angela Detanico & Rafael Lain have worked together since 1996. Semiologist and graphic designer, born in 1974 and 1973, respectively, in Caxias do Sul in Brazil. The artists live and work in Paris.

In 2002, the duo participated in an artist residency in the French capital, at the Palais de Tokyo. Two years later, they won the prestigious Nam June Paik Award. In the same year, in 2004, Detanico and Lain participated in the Bienal de São Paulo, a feat that was repeated in the following two editions, in 2006 and 2008. In 2007, the duo represented Brazil at the 52nd Venice Biennale, Italy.